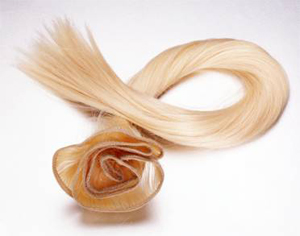 About 10 years ago, I got myself a weave. Not extensions – a weave. The difference is subtle, I’ll admit. This was around the time that celebrities were finally coming out of the beauty closet and admitting that those luscious, flowing locks we all envied didn’t belong to them – at least not until they were bought and paid for. Hair extensions have come a long way in the last decade, but my weave was old school.

At the time, I hadn’t had long hair since high school. I tried to grow it out, but I kept getting impatient and chopping it off before it passed my shoulders. I was discussing my hair woes with a black, female coworker when she piped up with a solution. “The woman who does my hair has a white customer whose hair she does! Do you want her number? She’ll hook you up.” Aisha had a different hairstyle every month, and she always looked good. Her hairstylist had experience doing weaves on white girl hair. Sounded good to me.

I called the salon and spoke with Aisha’s stylist. I felt a little awkward. “Uh, I’m a friend of Aisha’s. I’m interested in getting a weave – sewn in but loose. She said you could do, uh, white girl hair?” If it sounds like I’m making a big fuss over the black/white issue, it’s not that I’m a flaming racist. No, really. The fact of the matter is, I have the finest, straightest, blonde hair imaginable. To a hairstylist who is used to working with thick, textured hair that braids easily and holds a style, my showing up unannounced with this hair would be like bringing my vagina to a circle jerk. I didn’t want her to have a “What the hell am I supposed to do with this?” moment.

The hairstylist, whose name I cannot remember, but may have been Cassandra, assured me that she was up to the task. She gave me my instructions for buying my hair at the nearby Bags O’ Hair shop and bringing it with me to my appointment. We were both very excited. Okay, maybe just me.

On the day of my appointment, I walked into the salon, and I’m pretty sure I heard the needle skip and scratch across the record as everybody’s head turned to look at Blondie entering the salon. (The movie Beauty Shop hadn’t come out yet, so I was breaking relatively new ground here.) After a pregnant pause, everybody resumed their business, and my (yet unattached) hair and I made our way to the chair.

Cassandra was friendly and we chatted a bit about how I wanted my hair to look. Then what would become a nearly three hour process began. For those of you not familiar with a sewn-in weave, I’ll explain. My loose hair was parted across in sections, with the first part being from ear to ear. Then Cassandra braided a tiny cornrow braid (snug to the scalp) along that part. This is where my hair first started being fussy.

(Actually, here is a video that shows exactly what I’m talking about, except that these weaves are MUCH better than what I got.)

My hair is so slippery that the braid kept falling out; it just wouldn’t hold. No problem – Cassandra improvised. She took some wavy black hair weave from some secret hair stash she had lying around, I’m hoping not from the last customer or the floor, and braided it into my hair to give it the necessary texture. Since this part wouldn’t show anyway, it didn’t matter that the color of my cornrow was now a mixture of blonde and black. (See, this is where experience comes into play.)

After all my undercover cornrows were in place, it was time for the hair to go in. (This is where things went awry, but I wouldn’t realize it until later.) I had purchased two bags of hair at Cassandra’s instruction. The hair comes in pieces called wefts; loose hair attached to a strip across the top to hold it together. The wefts are then sewn into the cornrows with a needle and thread. You heard me right. That’s why those braids need to be tight as hell so you don’t have a floppy weave that smacks people in the face when you’re headbanging at Slayer concerts or whatever we white girls are supposed to do with our newly minted long hair.

Our ebony and ivory weave party drew a little attention now and then. One of the barbers in the salon seemed to approve, I think. At first he was perplexed: “I didn’t know white girls could get weaves.” Then as the process progressed, he praised Cassandra: “You are hooking that white girl up!”

Here’s the thing: I think that Cassandra’s other sole white client was a stripper. That is the only explanation I can come up with for the ungodly amount of hair that sweet woman put into my head. I felt like I was wearing a football helmet. I later realized she had doubled up the wefts before she sewed them in, essentially putting double layers of hair at every part. I mean, I was all hair. I don’t know how I didn’t tip over.

When she was finally finished, my head ached, and I wasn’t exactly thrilled with the results. My head was the size of Rosie O’Donnell’s with long blonde hair hanging from it. After I styled it with a curling iron, it looked pretty, in a Pamela Anderson way. I had to try not to wash it too often because when I did, the hair (despite being high quality human hair, or so I was told) looked and shed like a wet Cocker Spaniel. Also, because I had approximately 17 pounds of it, the layers of hair underneath never, ever dried completely. During the short time I had “the hair” I missed a friend’s wedding because I couldn’t get my hair ready in the two hours I had allotted for myself. It was like having a kid, but I couldn’t get my hair a babysitter.

Less than two weeks after getting my new hair, I sat down in front of my husband (then boyfriend) Bryan while he was watching TV, handed him the scissors, and asked him to cut out my weave. In less than ten minutes, my $250 stripper hair was no more. Incidentally, I like to think that little experience of Bryan taking out my weave brought us closer, mostly since there was no longer an 18-inch-thick wall of anonymous Indian lady hair between us.

I learned something from this experience. There is only so much I will do for beauty. The things that are too painful are usually not worth it anyway. (Maybe someday I’ll write about my Brazilian bikini wax, but I don’t think my readers or I am ready for that yet.)