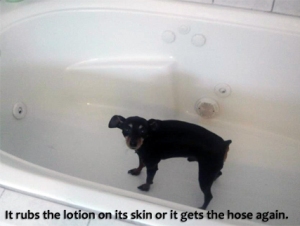 Despite appearances in the picture to the left, I did not make a Miniature Pinscher skin-suit out of my dog Fletcher. It was simply bath time, and I couldn’t resist the opportunity to illustrate what a giant pussy he is, figuratively speaking. Seeing him cowering in our massive pit of a bathtub, I couldn’t help but be reminded of the infamous scene in “Silence of the Lambs,” you know the one: “Put the fucking lotion in the basket!” Ah, good times. But anyway, that is my dog Fletcher, and although he is pretty well-behaved and stoic when it comes to bath time, he, even when I’m not quoting lines from demented serial killers, does scare easily.

Tonight is July 2nd, and the homies in my barrio are already Clint Eastwood-ing it up and pretending their firecrackers are .44 Magnums and every time they go snap-crackle-pop I can imagine them saying, “Go ahead, make my Independence Day” or some such shit. The point is, I don’t understand why 1) Everyone has to start their July 4th celebrations so fucking early and 2) The allure of firecrackers and noise-making shit to begin with. I haven’t really been into fireworks of any kind since I grew tits and found out boys were interested in them, but the male gender seems to never outgrow the need for things that go boom. At least the the colored, sky-bursting light show variety of fireworks make some sense – they are pretty and give you something look at while you drink beer and snuggle with your boo. I still don’t get the 2 second bang and it’s done kind. (Again, it can’t be a coincidence that these attract the males. Two second bang anyone? Sounds like my twenties.)

So, where does this tie in with my pathetic dog pictured above? Well, like I said, he’s less Canis domesticus and more Felis fraidycatius. My sweet boy has an anxiety disorder that would make Rain Man on a Southwest airlines flight look like Cool Hand Luke. Everything freaks him out. Thunderstorms and fireworks are the absolute worst. As I type this, he is shaking like a crack addict next to me, drooling on my keyboard. As revolting as that is, he used to be even worse. Fletcher used to get his invisible knickers in a twist at something as banal as the noise the TV makes when we turn it on and off. He’s evened out ever so slightly since we consulted with our veterinarian and got poor Fletcher on Prozac.

That’s right. My doggie is a card carrying member of the Prozac nation. Actually, we carry his card for him. Like millions of unfortunate Americans, Fletcher has been left behind by our hit-and-miss insurance system, so we signed him up for a CVS membership program so we could get his prescription at a discount. I’m not sure if they don’t realize he’s a dog, or think he’s some emotionally tortured genius dog, because his prescription bottle warns Fletcher Wiltzius that he should not drink alcohol or operate heavy machinery until he knows how his Prozac will affect him. I’m going to go ahead and say that he shouldn’t be doing those things anyway.

We didn’t take the decision to medicate our dog lightly. We tried other things first. Mostly yelling, which didn’t work, oddly enough. I watched Cesar Milan’s show where he gives a crazy dog the evil eye just once and that dog goes from urinating on people’s legs and biting them in the face to instantly mowing the lawn and helping the homeless. I didn’t glean any useful tips from him either. Since Fletcher’s anxiety mostly manifests itself with him barking nonstop, I bought one of those citronella collars that sprays every time the dog barks and buckled Fletch in. Within two minutes, the collar reservoir was empty, our house was stinky but mosquito-free, and Fletcher was still barking. So much for that.

We tried a few different drugs and settled on the Prozac. It’s still an imperfect solution. Fletch still freaks out when things get extra scary, like now with the asshole kids and their firecrackers. Or say, the entire hurricane/storm season from May through September. For times like these, he also has a prescription for Valium that he gets “as needed”. What people don’t understand is that having an anxiety-prone dog is, in itself, anxiety-inducing. I have my own prescription for Xanax. Nights like these are a “one for Fletcher, one for Mommy” situation. At least I don’t have to hide mine in a piece of sausage.

We have another dog named Lucy. She is pretty normal, or at least as normal as normal gets in this household. She has a bit of a weight problem, but living with all of these crazy fuckers will cause one to “stress eat”. Trust me, I know. She’s my angel. She gets a little anxious with the fireworks and thunderstorms too, but she just does a little submissive pee and hides in the closet like a normal dog. (I may be losing track of what is normal at this point.)

Both of my dogs came from a shelter, so who knows what kind of crazy shit they dealt with before I got them. (If I drove an SUV and were a little more bourgeoisie, I would say, “They’re rescues!” in that voice that lets you know that I think I saved the world by adopting them. But really, I picked up a couple of used dogs, I didn’t cure malaria.) Every time I look at my pre-owned bundles of joy, I think, “You little shits, no wonder you ended up with me. Who else would put up with you?” But we’re a perfect fit. They may be purebred pains in the ass, but I love them all the same.